Raisio got its start as Oy Vehnä Ab, a mill founded by Finnish wheat farmers on February 3, 1939 to grind the wheat grown by its shareholders and to market the flour.

Raisio got its start as a mill

Raisio got its start as Oy Vehnä Ab, a mill founded by Finnish wheat farmers on February 3, 1939 to grind the wheat grown by its shareholders and to market the flour.

The outbreak of World War II delayed construction of the Raisio mill, but it finally went on stream at the end of 1942. Like other foodstuffs, grain products were strictly rationed. As the Ministry of Supply was responsible for distribution of the products, marketing posed no problem for the new mill.

Raisio’s first brand was Vakio, a wheat flour. Sunnuntai® (Sunday) wheat flour was introduced in 1967 and the Sunnuntai® brand soon grew to include margarine and other baking products. Sunnuntai is still one of Raisio’s strongest local brands.

Raisio’s animal feeds industry was created in 1948 to utilize the by-products of milling operations. These early feed mixtures, made from scarce raw materials with primitive equipment, can hardly be compared with feed mixes made today. The first real feed factory came on stream in 1960. Now Raisio could make the same amount of feed in two hours that ten years earlier would have required 24 hours to produce.

In 1970’s a new feed factory was constructed in Raisio. The company also had feed factories in Anjalankoski and Oulu as well as specialized feed units in Hämeenlinna and Uusikaarlepyy.

Building a malting plant was a large project for the young company. Machinery was so difficult to obtain after the war that all equipment needed for the malting plant had to be assembled at the company workshop from various leftover parts from machinery and equipment made to send to the Soviet Union as part of Finland’s war reparations. Raisio produced the first beer malts in 1950. Exportation of malt began in 1968 with deliveries to Sweden. 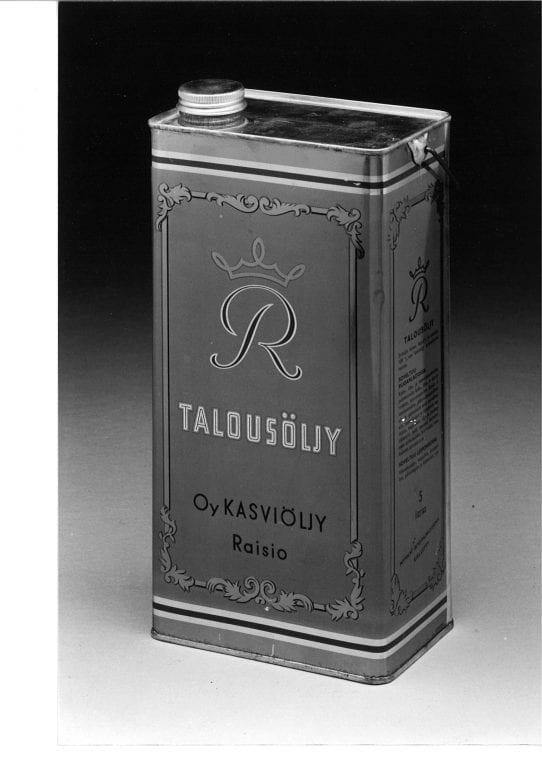 In 1950 an oil milling plant, Oy Kasviöljy-Växtolje Ab, was founded in Raisio next to the Vehnä mill. At the new company’s initiative, rapeseed (canola) cultivation began in Finland and expanded to become an important area of agricultural production. Oy Kasviöljy-Växtolje Ab began its operations in close cooperation with Vehnä, and in 1987 the two merged to become Raision Tehtaat Oy Ab, later renamed Raisio Group plc. In the early years rapeseed cultivation was quite successful: providing high yields, the grain proved to be a source of profit for its growers. Finnish rapeseed oil came on the market in 1954 named as R Talousöljy.

Two separate developments led to the founding of the margarine plant. The rapeseed oil being refined at the oil milling plant was still a new and strange raw material for existing margarine producers. In order to stimulate demand, the company needed to develop its own processing operations, and at the same time, individual retailers wanted to found their own plant.

The decision to found Margariini Oy was taken at a meeting of Oy Kasviöljy-Växtolje Ab’s supervisory board at the beginning of 1956. Urho Kekkonen, who would be elected President of the Republic of Finland later that year, chaired the supervisory board meeting. The margarine factory’s first consumer product was Raisa margarine in 1958.

The key to the Raisio’s strength is joint ownership by retailers and bakery operators as well as agricultural producers. This tripartite ownership also led to establishment of direct links with all phases of the food production chain: primary production, processing and the retailing. The margarine company merged with the parent company (Raisio Group) in 1995.

Raisio’s Chemicals Division can be considered to have started up in 1961, when the first separate factory unit for chemical production was completed. The oil milling plant and the mill already of course manufactured a number of chemical products such as varnish, some technical oils and wheat flour for glue production.

Products made by the fats chemistry unit included distilled fatty acids for the soap, detergent and candle industries as well as fatty amines, or reprocessed fatty acids.

In 1971, production of latices used to coat printing paper began in Mietoinen, near Raisio, launching the Raisio’s cooperation with the paper industry.

Starch serves as an important raw material in a range of reprocessing applications. The group’s own starch production provided a solid foundation for the vigorous growth of its Chemicals Division, steering it more and more towards production of binders and special chemicals for the paper industry.

In autumn 2003, the Raisio Board reassessed the vision and strategy and Raisio’s resources were decided to focus on developing the Nutrition and Life Sciences businesses. Therefore, it was decided to find a new industrial owner for Raisio Chemicals and in the summer 2004 Raisio Chemicals was sold to Ciba Specialty Chemicals. 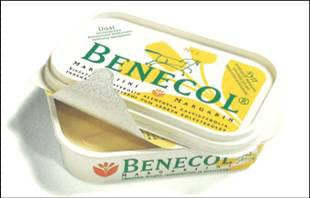 At the end of 1995 the publishing of Benecol® innovation attracted international attention. On 16 November 2005 celebrated Benecol’s 10th anniversary. In 2008 Benecol® products were launched on the Asian Market: in India, Indonesia and Thailand. On the same year the European Food Safety Authority (EFSA) issued a positive scientific opinion on a disease risk reduction health claim of plant stanol ester. The Ministry of Health of the People’s Republic of China gave a New Resource Food approval to add plant stanol ester to foodstuffs marketed in the country.

Plant stanol ester was selected as one of the ten greatest discoveries in nutrition worldwide in European Journal of Clinical Nutrition in January 2009.

Since the Benecol® acquisition from the affiliates of Johnson & Johnson in November 2014, home markets for Benecol® consumer products are the UK, Ireland, Belgium, Poland, Finland, Portugal and Hong Kong, Benecol® products are sold in almost 30 countries and Benecol® is the best known brand for cholesterol-lowering foods.

Raisio to focus on well-being

In autumn 2003, the Raisio Board reassessed the vision and strategy drawn up for the troup in 2001. Raisio’s resources were decided to focus on developing the Nutrition and Life Sciences businesses. Therefore, it was decided to find a new industrial owner for Raisio Chemicals. Among several potential buyers, Ciba Specialty Chemicals was considered the best alternative from both the financial and the industrial perspective. The enterprise value of EUR 475 million settled Raisio’s debts and allowed it to focus more sharply on its key competence area, well-being.

According to its new strategy Raisio is focusing on developing plant-based foods and ensuring the security of foods. In spring 2005, company was renamed from Raisio Group plc to Raisio plc.

In 2006, Raisio’s operations were organized in four divisions: Food, Feed & Malt, Ingredients and Diagnostics. In the end of November 2006, Matti Rihko was appointed Raisio’s CEO.

The main target for 2007 was to improve profitability through streamlining, focusing and enhancing operations. Hereby Raisio divested its food potato and diagnostics businesses and carried through several minor structural changes. Raisio and its partner McNeil signed an agreement that returned Benecol rights to Raisio.

In 2008, Raisio equipped its Elovena® oat flakes with a label that indicates the CO2 emissions of the product and thus created a new labelling indicator. In 2009, as the first in the world, Raisio added an H2O label to oat flakes package, indicating the total water consumption of the product. Raisio devised its own calculation model for the label.

Pekka Kuusniemi was appointed as Raisio’s President and CEO in 2017. The company divested its confectionery business in the end of 2017 and the cattle feed business in 2018.

In 2018, Raisio defined its purpose, values, the new strategy and corporate responsibility programme. The company’s values are courage, fairness and drive. The strategy 2019–2021 has a clear focus on healthy, responsibly produced food.

In 2021, Raisio acquired the Finnish company Verso Food Oy and published a new strategy for 2022–2025. The strategy is based on three focus areas: Benecol® products and plant stanol ester solutions, oat-based consumer products and oats as an industrial raw material, and plant-based food. In the same year, a new production facility was built in the carbon-neutral industrial area in Raisio, and the first plant-based products produced there have reached stores in Finland in September 2021.

We use cookies on our website to give you the most relevant experience by remembering your preferences and repeat visits. By clicking "Accept", you consent to the use of ALL the cookies. However you may visit Cookie Settings to provide a controlled consent. More information from our privacy statement.
Manage consentACCEPT
Manage consent

Raisio privacy statement
Strictly necessary cookies Always Enabled
These cookies are necessary for the website to function and cannot be switched off in our systems. They are usually only set in response to actions made by you which amount to a request for services, such as setting your privacy preferences, logging in or filling in forms. You can set your browser to block or alert you about these cookies, but some parts of the site will not then work. These cookies do not store any personally identifiable information.
Advertisement
These cookies may be set through our site by our advertising partners. They may be used by those companies to build a profile of your interests and show you relevant adverts on other sites. They do not store directly personal information, but are based on uniquely identifying your browser and internet device. If you do not allow these cookies, you will experience less targeted advertising.
Performance
These cookies allow us to count visits and traffic sources so we can measure and improve the performance of our site. They help us to know which pages are the most and least popular and see how visitors move around the site. All information these cookies collect is aggregated and therefore anonymous. If you do not allow these cookies we will not know when you have visited our site, and will not be able to monitor its performance.
Functional
Functional cookies help to perform certain functionalities such as sharing website content on social media platforms, collect feedbacks, remember language selections, or other third-party features.
Save & Accept
Powered by